Hexavalent chromium (CrVI) is one of the most dangerous and widespread environmental contaminants. It is toxic and carcinogenic to humans; very soluble in water, when it reaches the aquifer it moves easily creating extended plumes of contamination. Soil and groundwater naturally occurring bacteria, if properly stimulated, are able to reduce the hexavalent chromium turning it into non-toxic trivalent form, quickly and irreversibly.

Chromium exists in several oxidation states, the most common being the trivalent and hexavalent forms. Hexavalent chromium is considered to be one of the most important environmental pollutants because it is toxic, mutagenic, carcinogenic and, thanks to the high water solubility, can spread over large areas. The hexavalent chromium is one of the most widely used heavy metals in industry (metallurgy, chemical, textile, etc.).

Large amounts of hexavalent chromium, in the form of chromates, are released into the environment as a result of activities such as the chrome plating of metals, wood preservation and the production of pigments.

The trivalent form is not toxic if not in high doses, is a trace element useful in the metabolism, poorly water soluble and therefore less mobile in underground aquifers, where it is located either in the form of cationic species that tend to adsorb to the solid matrix, or as insoluble precipitate as the hydroxide Cr (OH) 3 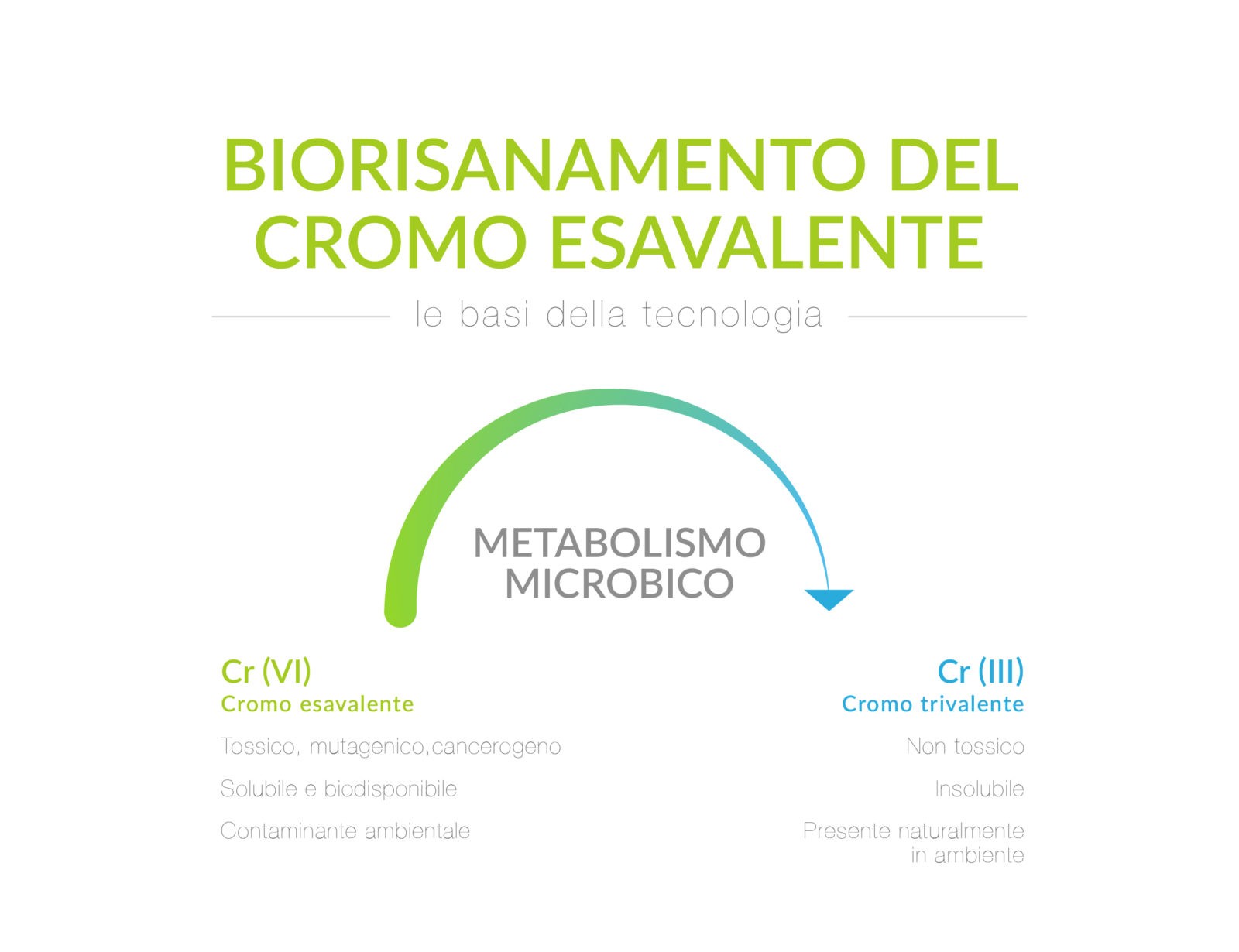 The biotechnological system, developed with a specific research and development activity, is economically and environmentally sustainable, because it exploits bacteria already present in the site; these are stimulated to perform the biochemical reduction of hexavalent chromium by the addition of biodegradable nutrients to the matrix.

This technology is specifically fine-tuned for each site. It is successfully performed on soil and groundwater, regardless of the intensity of the contamination, the underground depth at which it is detected or the redox conditions. The treatment is safe, as it does not require the use of foreign bacteria, but it is designed to increase the microbial biomass already present in the environmental matrix.

The remediation of groundwater contamination by hexavalent chromium is most frequently performed by drilling deep wells through which water is pumped out and sent to a water purification system (when present), or simply discharged in a river stream. This method is known as PUMP & TREAT.

At Biosearch Ambiente we have amply demonstrated that the PUMP & TREAT practice is not very effective in filtering the underground pollution, cannot intervene directly on the source of contamination, and yet is very expensive as it may require decades before reaching the limits of contaminant concentration set by the law.

The bioremediation technology defined by Biosearch Ambiente, on the other hand, is able to reclaim the polluted matrices in a reasonable time.

Bioremediation technologies can cut remediation costs by up to 70% compared to PUMP&TREAT.

Biotransformation of the toxic Cr(VI) into the non toxic form Cr(III) by the metabolic process of natural microorganisms.

Delivery of a nutrient mixture into the subsurface to stimulate microbial growth and promote the detoxification process. The mixture does not contain toxic substances or live organisms.

We have successfully performed several interventions on land and groundwater polluted with hexavalent chromium, under various operational conditions and in the presence of relevant concentrations.
In the link below it is reported the case of a highly contaminated operative industrial site in Lombardia Region (Italy).