Chlorinated solvents, such as perchlorethylene, trichlorethylene or chloroform, are a class of chemicals widely used in many industrial processes. They pose a serious danger to human health when dispersed in the environment, due to their toxicity and carcinogenicity. These pollutants are frequently found in groundwater. An effective and decisive strategy for their removal from the environment is to exploit the metabolic action of bacteria naturally present in the contaminated sites.

Chlorinated solvents are  a  family of chemical compounds widely used  in household products and in industrial processes. They are frequently found to contaminate the groundwater system where they pose a serious threat to human health and the environment. An effective remediation approach is to exploit the natural capacity of  bacteria to degrade these chemicals via their metabolic apparatus.

Chlorinated solvents such as perchlorethylene (PCE), trichlorethylene (TCE) and vinyl chloride (VC), are aliphatic hydrocarbons, halogen-substituted, each of which contains at least one chlorine atom.  They find massive use in industrial processes such as degreasing of metal surfaces, textile treatment,  and  the production of other chemicals (pharmaceuticals, refrigeration, etc…). Improper disposal operations have caused a great and serious environmental contamination. Groundwater is usually affected, since the high density and low viscosity of these compounds favor the vertical movement towards the aquifer.

The maximum permissible concentration limits of chlorinated hydrocarbons in groundwater and soil is regulated in Italy by Legislative Decree no. N ° 152/2006.

Biosearch Ambiente has developed a biotechnological method for the remediation of sites contaminated by chlorinated solvents, with high environmental and economic sustainability. The method is based on an established technology: the in situ bioremediation. It consists in the delivery of a mixture of natural substances, consisting of macro and micro-nutrients, on the polluted  matrix, that stimulate the growth and metabolism of the indigenous microbial community capable of degrading pollutants.

The main biological degradation mechanism is the reductive dechlorination, i.e. the replacement of the chlorine atoms with hydrogen atoms (H) in anaerobic conditions; in this process the pollutant molecule is chemically reduced, being  the final electron acceptor. Therefore,  for example,  chlorinated solvents such as  PCE and TCE are transformed in non-toxic compounds such as ethene.

Some chlorinated solvents may also be degraded in an oxidizing environment, or by co-metabolism.

The identification of the remediation system, which is site specific and requires a multidisciplinary approach, involves two basic steps: the first, on a laboratory scale (microcosm test) and the second, in the field (pilot test), before application on a large scale.

In situ bioremediation can be applied for treatment of both dissolved-phase chlorinated aliphatic hydrocarbons and DNAPL source zones. The last is an emerging application, that in some sites it may be the sole remedy; in other cases, ISB will be one component of a larger remedial strategy.

The proposed technology is also indicated for the bioremediation of hexavalent chromium, which often accompanies this type of contamination. 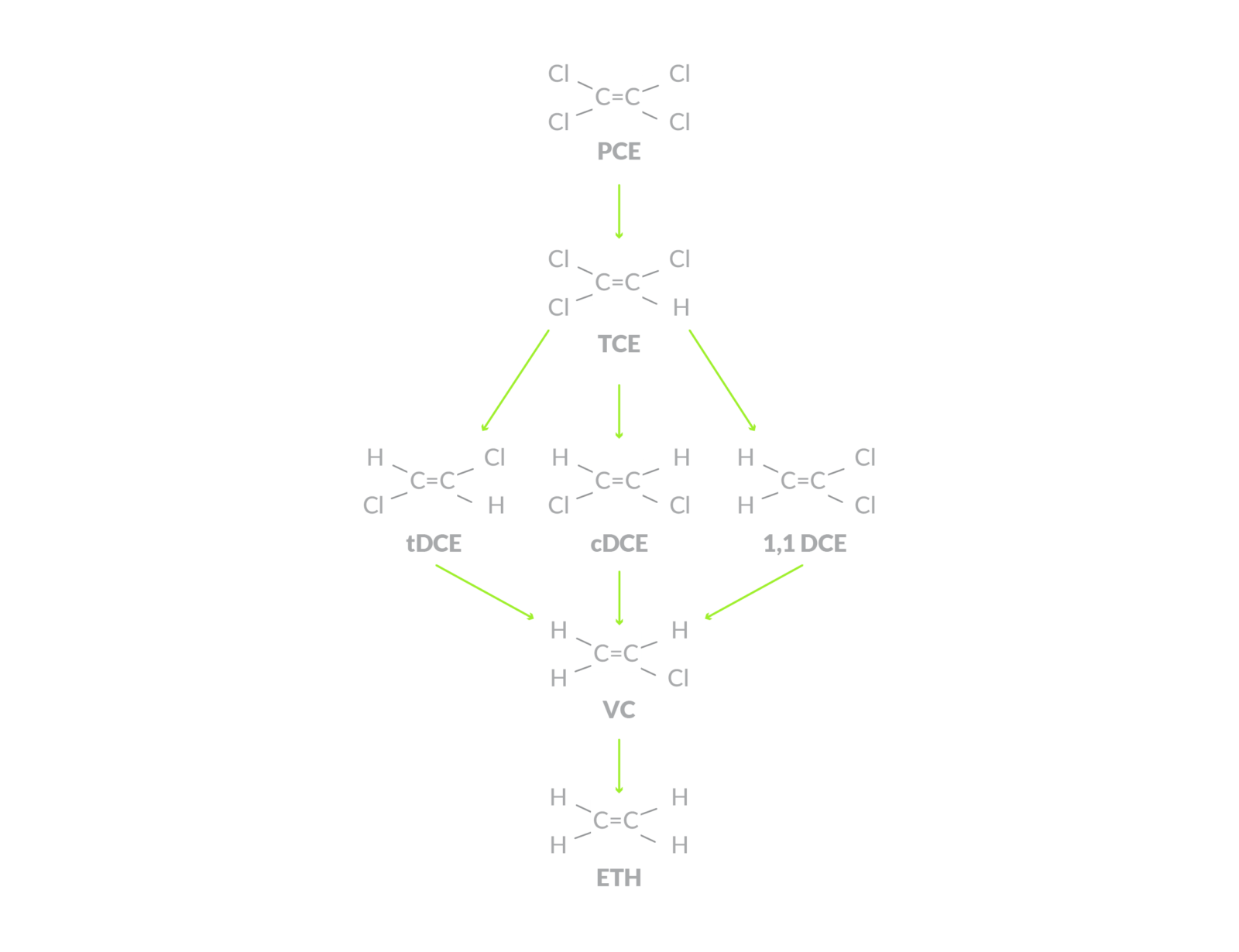 Many remedial alternatives have been developed for the removal of chlorinated solvents  from contaminated groundwater, such as Pump & Treat, air sparging, permeable  reactive barriers with zerovalent iron, etc …. The most widely used system in Italy is Pump & Treat. This system is often particularly expensive by virtue of the long operation time that is usually required. This is especially true in the presence of chlorinated solvents in the form of DNAPLs (Dense Non Aqueous Phase Liquids). In such case the DNAPLs act as a source of slow and persistent release.

An alternative approach is a system that exploits the ability of some microorganisms, mainly bacteria, that are naturally present in contaminated groundwater and can degrade chlorinated hydrocarbons, when stimulated with the appropriate mixture of nutrients.

Currently, the reductive dechlorination operated by the bacteria naturally present in groundwater is the most promising approach for the in situ remediation of groundwater contaminated by chlorinated solvents.

First step is the anaerobic biological reductive dechlorination. In this process high chlorinated solvents are transform into less chlorinated molecules, like 1,2-dichloroethenes and vinyl chloride monomer.

Second step of  biodegradation, in which 1,2-DCE and VC are completely degraded, can occur in the presence of oxygen, but also in anaerobic conditions.

These processes mention above are biologically based and they are driven by natural microbial community of the contaminated aquifers. These microorganism are able to transform and degrade contaminants into harmless end-products.

In situ bioremediation by stimulating  autochthonous microbial community with the addition of electron donors and/or acceptors.

12-24 months, depending on site geology and hydrogeology, age of contamination release and other key factors.